Scenario Based Learning: How to Create Scenarios (with Examples and Templates!) 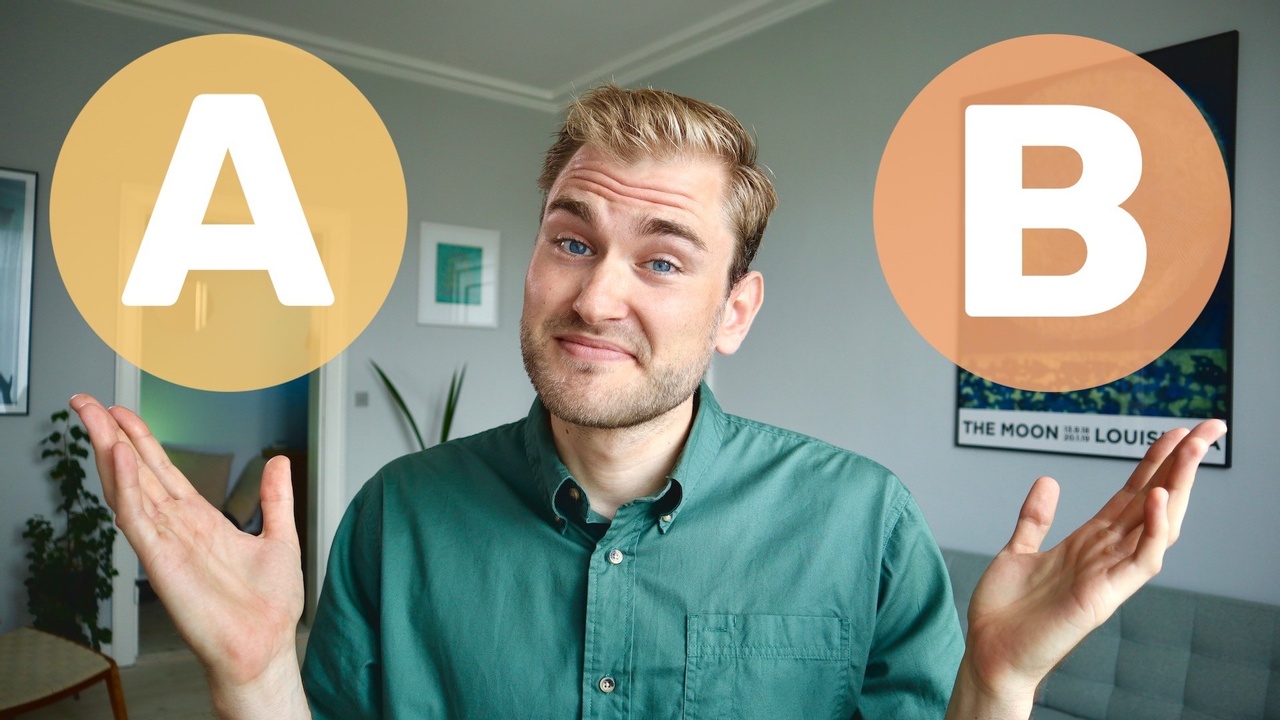 Experience this Scenario-Based Training yourself💡

Scenario-Based Learning is an instructional strategy that uses interactive scenarios as the basis for learning.

These scenarios imitate real-life situations and train the viewer in complex decision-making via simulated work challenges.

Sorry if that sounded boring, but that's what it is :)

Well, then why don't we try to actually create some scenarios, not that we know how effective they are—and we have the tools to do it.

This first video is where I talk about 1) what scenario-based learning is and 2) what the theory behind SBL is.

As we've already touched upon, Scenario Based Learning, or SBL, is a learning method where the learner is presented with a situation or scenario and is then asked how to go forward from this scenario.

This way of teaching and learning is based on the principles of situated learning theory formulated by Lave & Wenger in 1991. They argue that learning best takes place in the context in which it is going to be used.

Scenario-Based Learning also has a lot in common with situated cognition, formulated by Kindley in 2002. It’s a similar idea — that knowledge is best acquired and more fully understood when situated within its context.

Great! With that out of the way, we are ready to dive into an example of what SBL could look like, right?

To build a scenario, we need to provide some information on where it takes place, who’s there, and what’s happening. 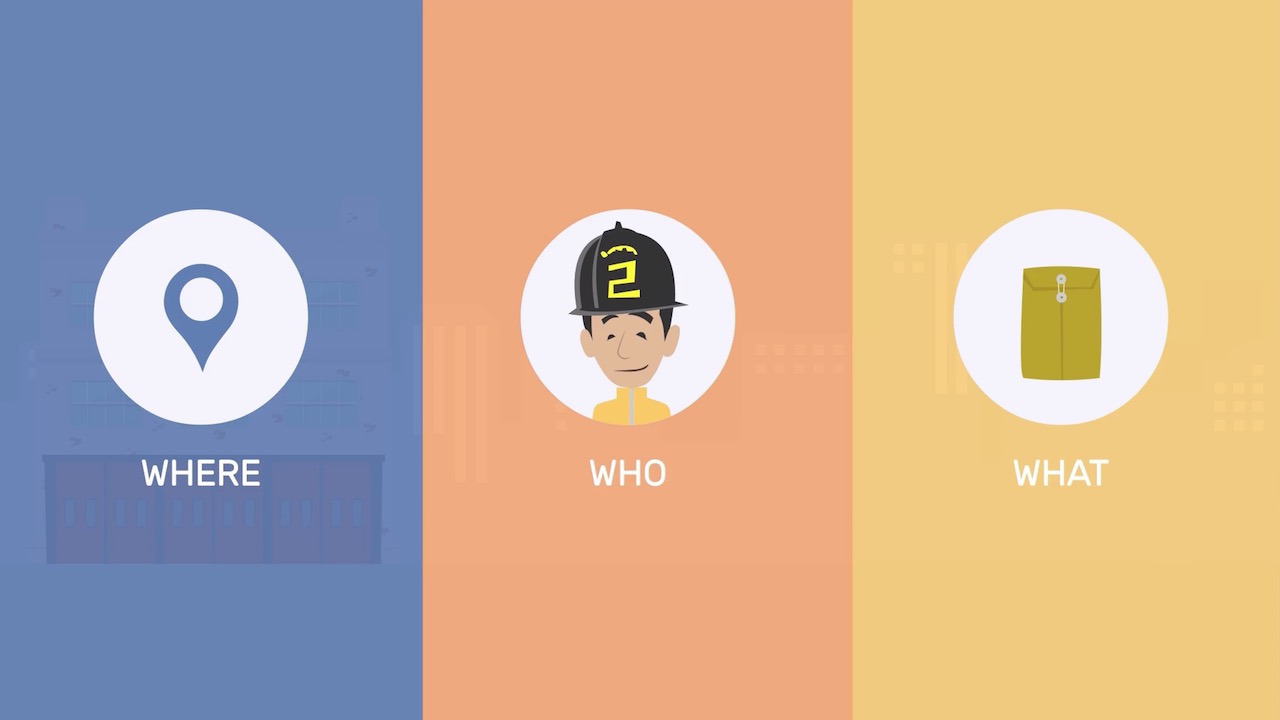 Imagine you're a firefighter.

It’s your first day on the job, and you’re sitting in the fire station's meeting room. One of your new colleagues comes in and hands you an onboarding checklist and tells you that this is what everyone reads before they start fighting actual fires.

He asks you to finish it today because one of the others called in sick for the week, so they need you to join the team tomorrow.

He then leaves the room, and you’re alone with the checklist.

What do you do?

Do you choose A: You start reading the checklist?

Or do you choose B: You get your manager instead?

Going through a long checklist of things to remember is probably not the best way to learn how to fight fires.

Plain information tends to be forgotten because our brains don’t function like computers; we have a natural limit to how much we can process and store in our memory.

Most of what we learn is soon forgotten - unless it’s tied to something we already know or a context that gives meaning to what is taught. 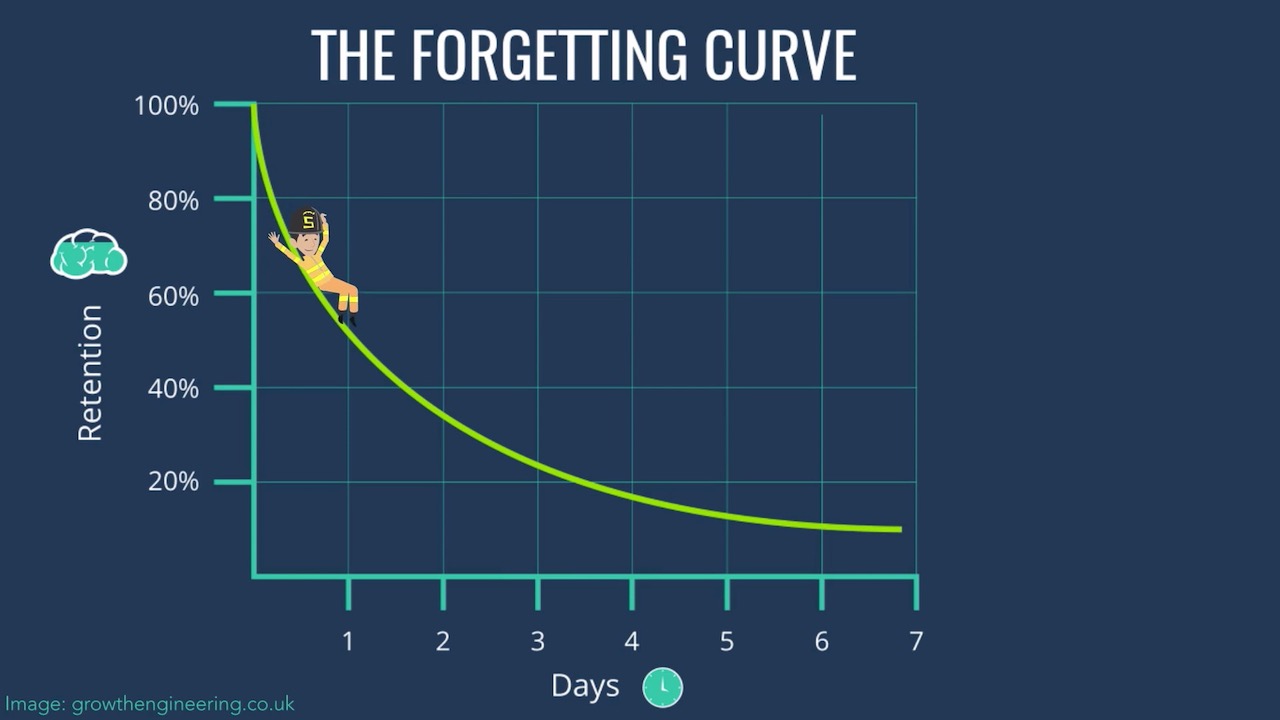 Would you like to know why that is? Then let's take a look at the other option (Option B), where we go get our manager instead.

If you are going to learn how to fight fires, you need better training and much more than a simple checklist with things to remember.

There is no substitute for experience as the basis for job competence, but sometimes it's not easy to find a real fire to practice on.

Then, scenario-based e-learning offers an opportunity to “fake” that situation, so you can gain experience in a safe and controlled manner. 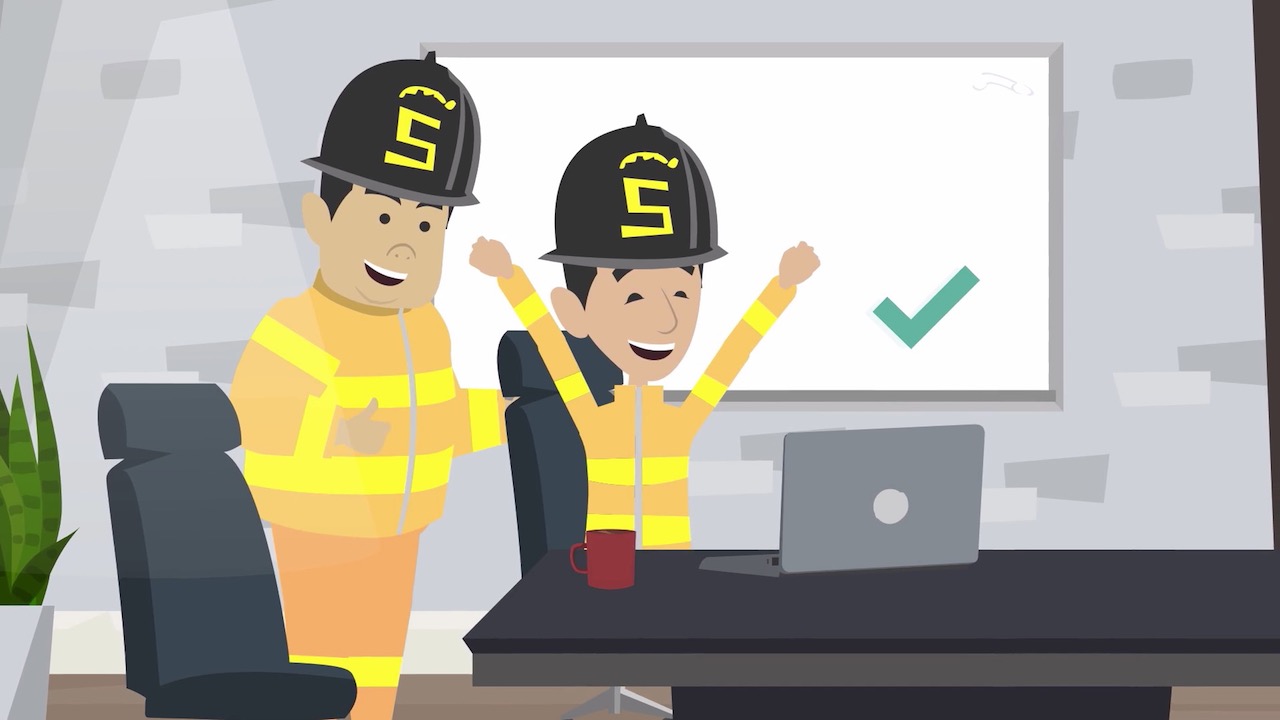 This contextualizes the learning much more than simply reading through a number of things to remember.

If you’re a human, your brain will most likely not be able to recall a point from a checklist at the right time anyway. Would you like to know why? Or do you want to learn how to design SBL?

How to Create Scenario-Based Learning

You can create scenarios using text, images, and sound, but the most popular format (and my favorite) is video.

Especially animated video is perfect for this because it’s relatively fast and cheap to think up a scenario and bring it to life in software like Vyond - instead of recording it live using light, sound, cameras, and real people.

To structure your SBL training videos, you can use one of my 3 super simple structures, which I’ve named “Right/Wrong”, “Right/Left”, and “Decision Tree”. 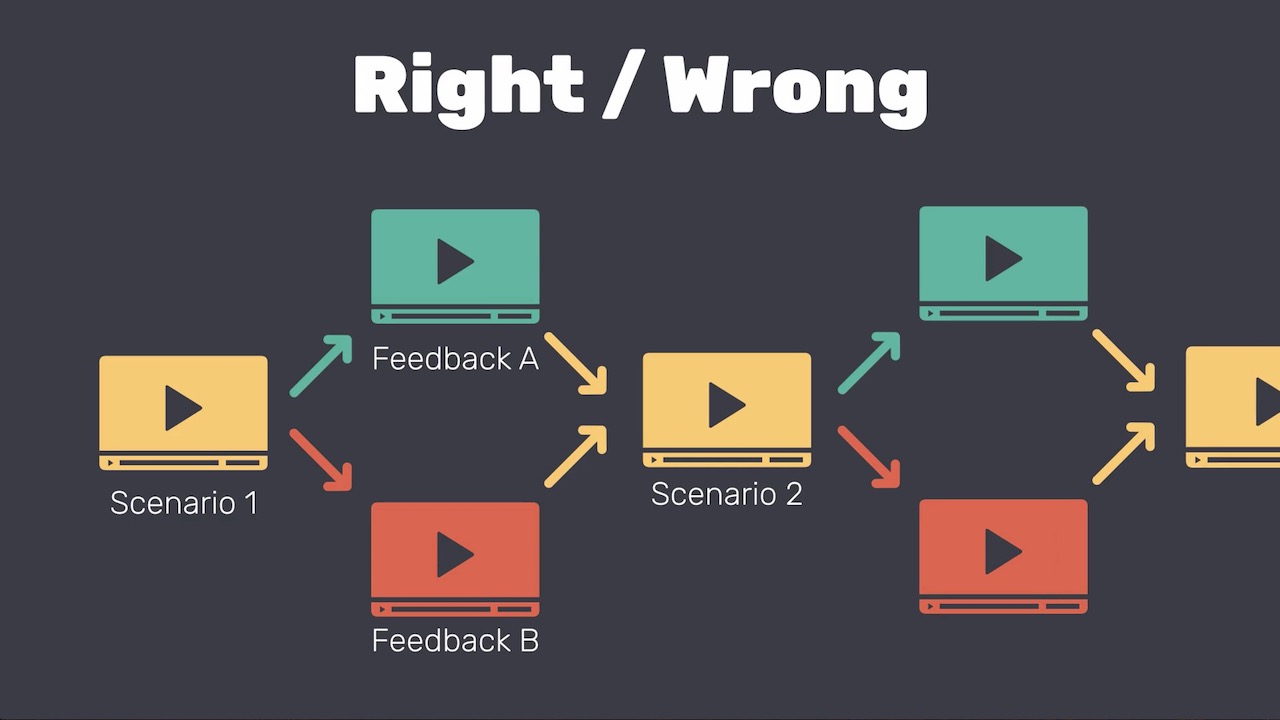 With the Right/Wrong structure, your first video describes a scenario where there is a right and a wrong answer.

You then create two more videos for each answer, where each one explains why this choice was either right or wrong. Both videos then link to a fourth video which is a new scenario with 2 options at the end, and so forth.

If you are training for a job where there’s no definitive right and wrong thing to do, you can use the Right/Left template. 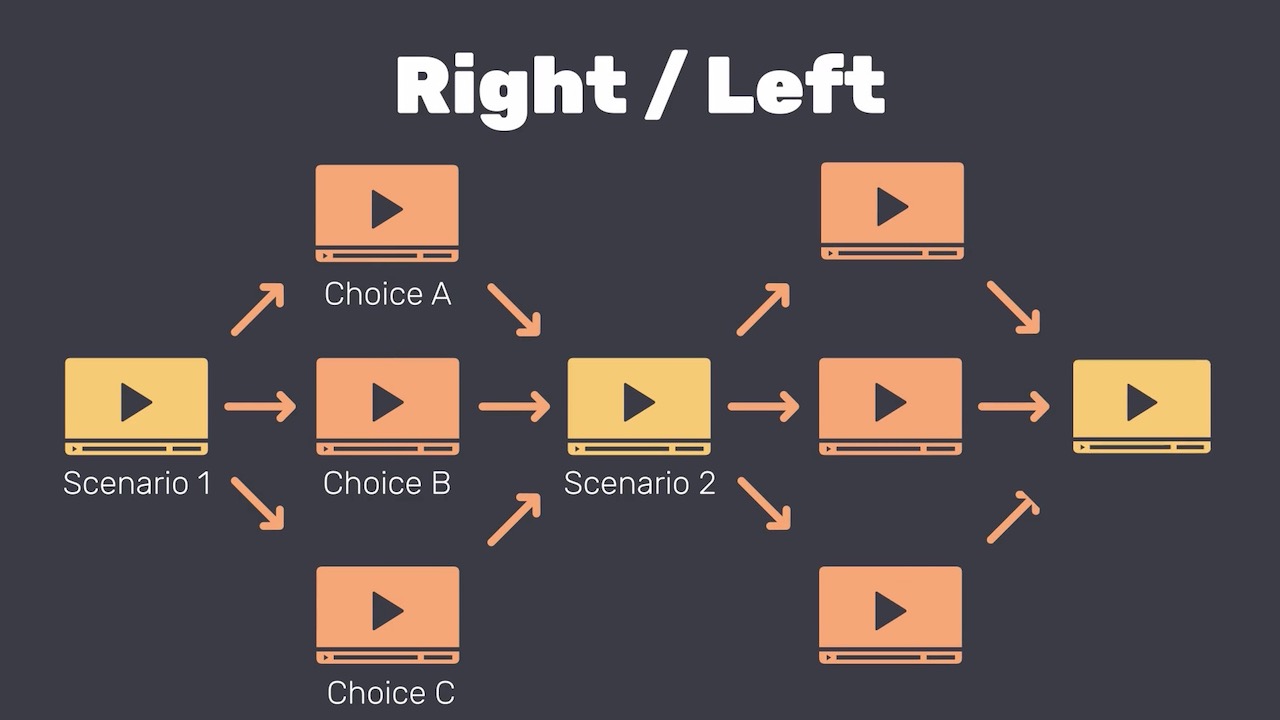 With the Right/Left structure, you present a scenario in your first video and give the learner 2 or more options to choose from. Each choice has a consequence, and you create a video for each consequence to give the learner feedback on their choice.

At the end of these videos, you link to the other choices, so the learner can understand what would have happened with a different choice, and you also link to the next scenario video.

The last structure is the decision tree and requires a bit more work. 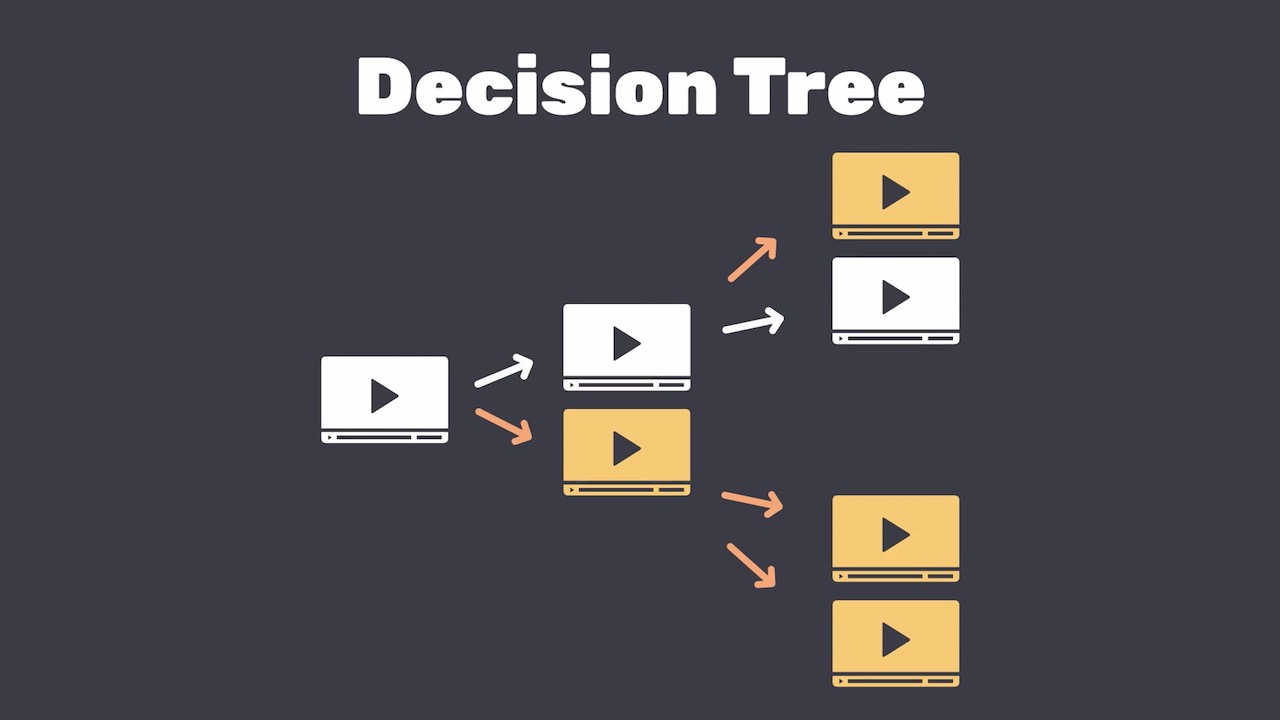 This structure doesn’t return to a “next scenario” again and again. Instead, you create custom videos based on the choices and path the learner takes. So every video is feedback on the choice that was made and a presentation of a new scenario resulting from that choice.

SBL usually works best when it’s applied to tasks that require decision-making and critical thinking in complex situations. So you’ll probably need to tailor your structure to the subject you’re teaching.

What’s most important is that your structure provides a UNDERSTAND, APPLY, REFLECT loop. 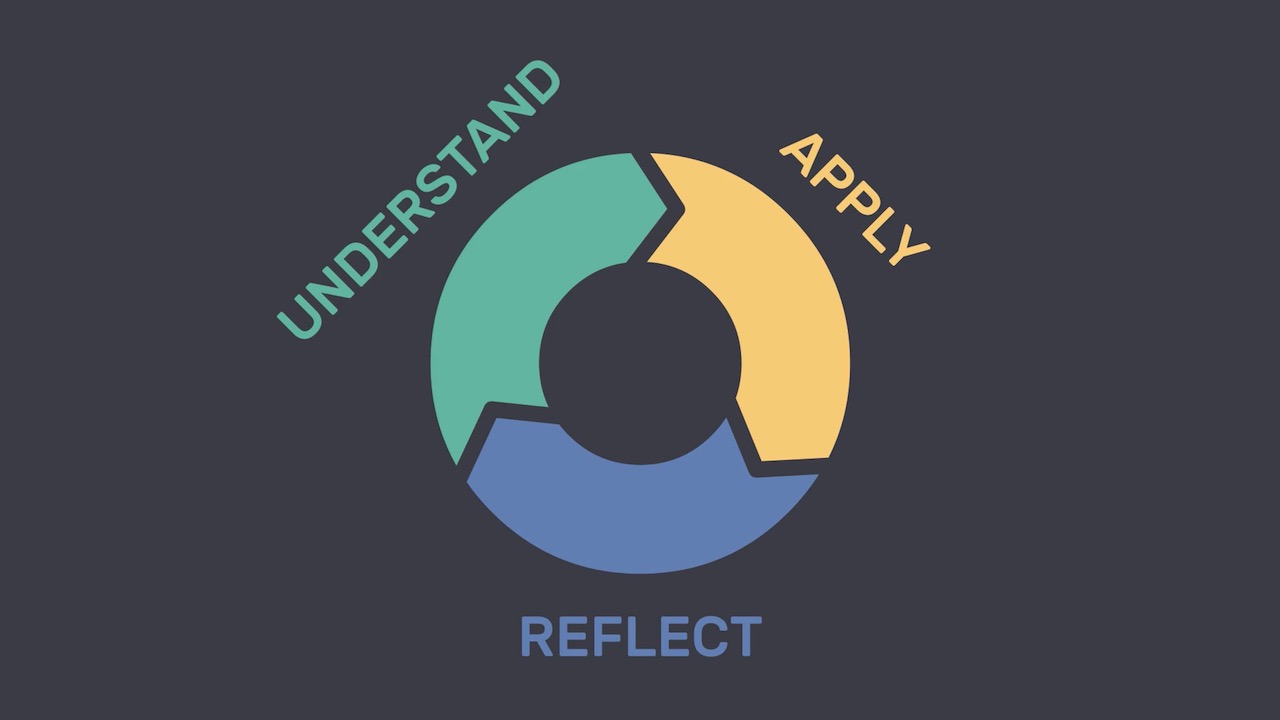 HOW TO LINK STEPS

A common way to link scenarios together is by using something like Articulate Storyline.

Here, you can embed short scenario videos and let the learner make a choice by clicking on one or the other button.

I’ve used YouTube’s End Screens to link these videos together, which is also an easy and free option.

No matter what tool or platform you use, make sure you write your script in such a way that every path makes sense and every video starts and ends in a way that connects to one or more next videos.

It’s not easy to design SBL and to develop the actual content for it, but it’s worth the effort as this type of simulated work challenges result in a steeper learning curve than traditional fact-based learning and better retention of what to do and how to act when that scenario happens in real life.

If you struggle with the structuring of your videos, I recommend my course Strong Scripts. If it’s the animated video content that is your bottleneck, my course Go Beyond Vyond will help you with that.

What are the benefits of scenario-based learning?

Scenario-Based Learning works better than fact-based learning in most modern jobs. Memorizing a list of facts becomes less and less valuable as a skill, now that computers have taken over much of the memory capability we used to possess.

Now, we train our kids, our employees, and ourselves for complex decision-making instead of memorization. Beyond learning this crucial skill of navigating in complex situations, scenario-based learning also:

What is an example of a Scenario?

To create a scenario for SBL, you only need a few categories of information to make it meaningful.

It's easy to complicate the creation of a scenario, but I believe you can create effective scenarios with the following information:

If you can check off these 3 points, you have a scenario rich enough to use in a training situation. An example of a scenario that uses these 3 pointers could look like this:

It's 5 PM on a Monday afternoon, and you're halfway through your shift, standing in the McDonald's kitchen by the frier. Together with you are 2 other colleagues, one serving customers and another one flipping burgers.

All of a sudden the frier's alarm goes off and the oil starts to rise. Your colleagues stop what they're are doing and turn to look at you. What do you do?

This is a super simple scenario, describing where who and what is going on. It gives a little bit of background info for the learner to understand the context in which a decision is going to be made.

How do you design Scenario Based Learning?

The most common way to design SBL is with PowerPoint/Slides and text—then make it interactive using Storyline or a similar tool.

This results in a clickable and interactive journey through pictures and text blocks that assumably helps the learner learn about a specific topic needed in their job.

A more modern way to design Scenario-Based Learning is to incorporate short microlearning videos into the mix. These can be made with stock clips or with animations made in tools like the popular Vyond Studio.

It's usually the development of content that takes up the majority of the time it takes to design scenario-based training.

But if you have a powerful process in place, it doesn't have to take ages to design your building blocks for SBL.

The setup of the interactivity is usually simple and thought into the content development.

In my video series and this guide on Scenario-Based Learning, you’ve learned about the basics of SBL and its theoretical foundation. You’ve seen an example of an onboarding scenario at the fire station, and I’ve shown you 3 different ways to structure this kind of learning.

Lastly, we touched upon how to connect your videos - both via tools but also in the way you design your scripts.

If you liked this post, you’ll love the next one. So make sure you're signed up to my list, so I can let you know when the next post is published.

Until next time, remember to take care of yourself and those around you.

See you again next week.

Whenever you're ready, there are 3 ways I can help you:

Over a few days, you'll get my free email class "Explainer Experts" on how to create high-quality, watch-worthy videos. 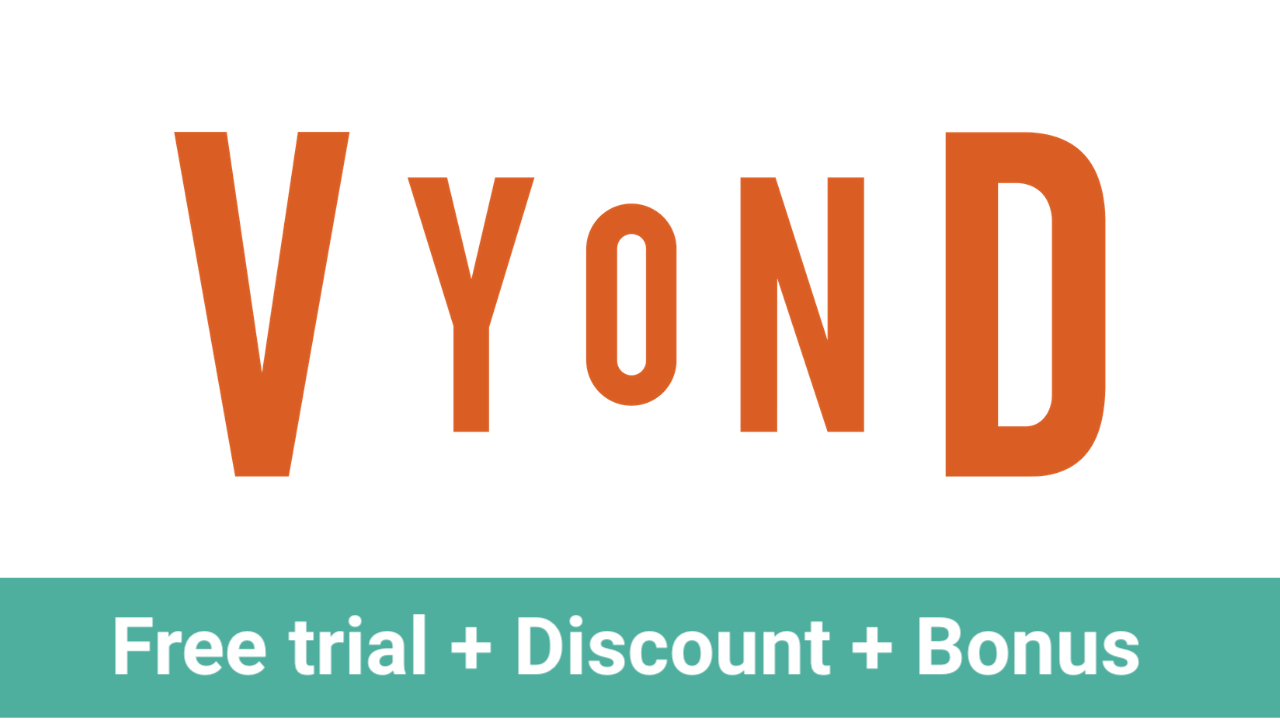 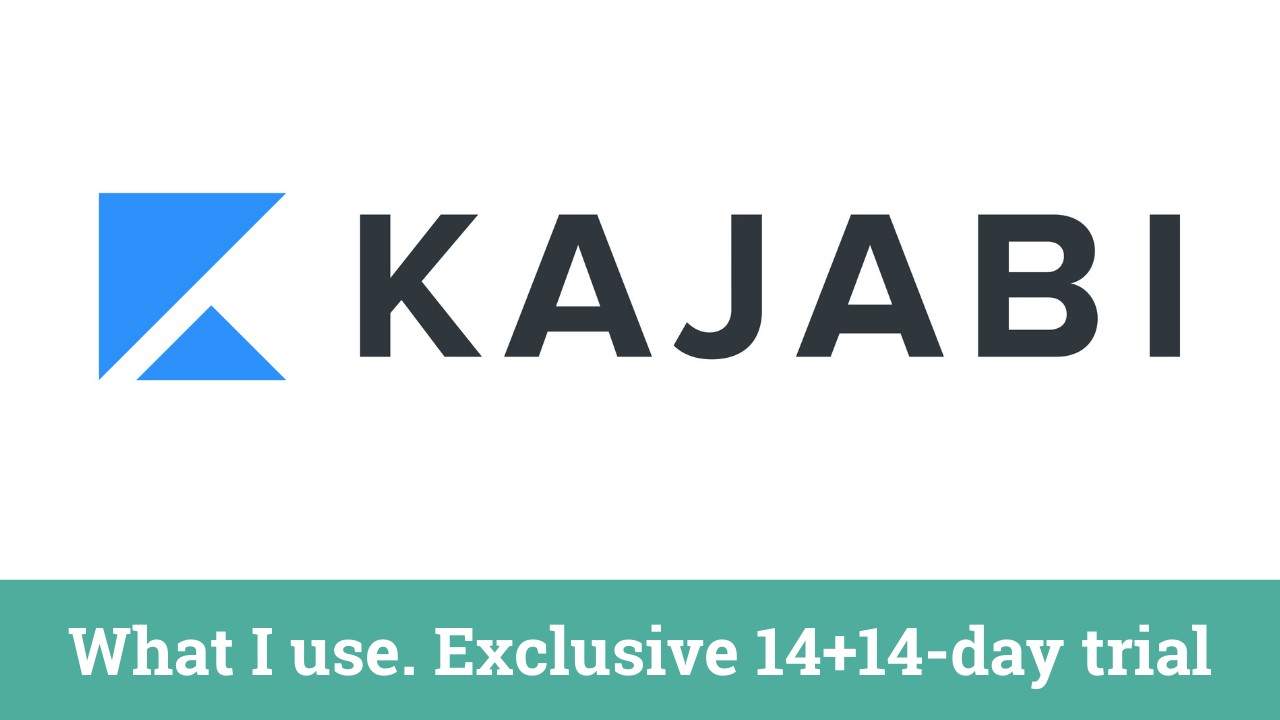 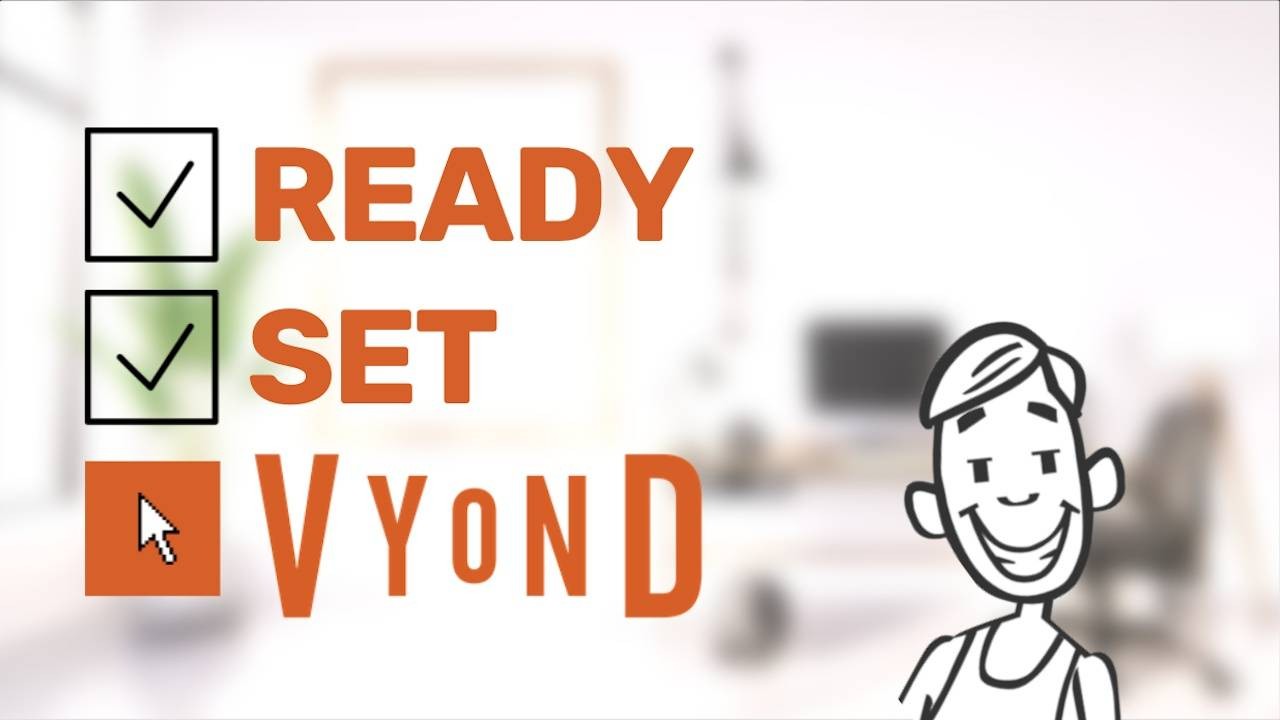 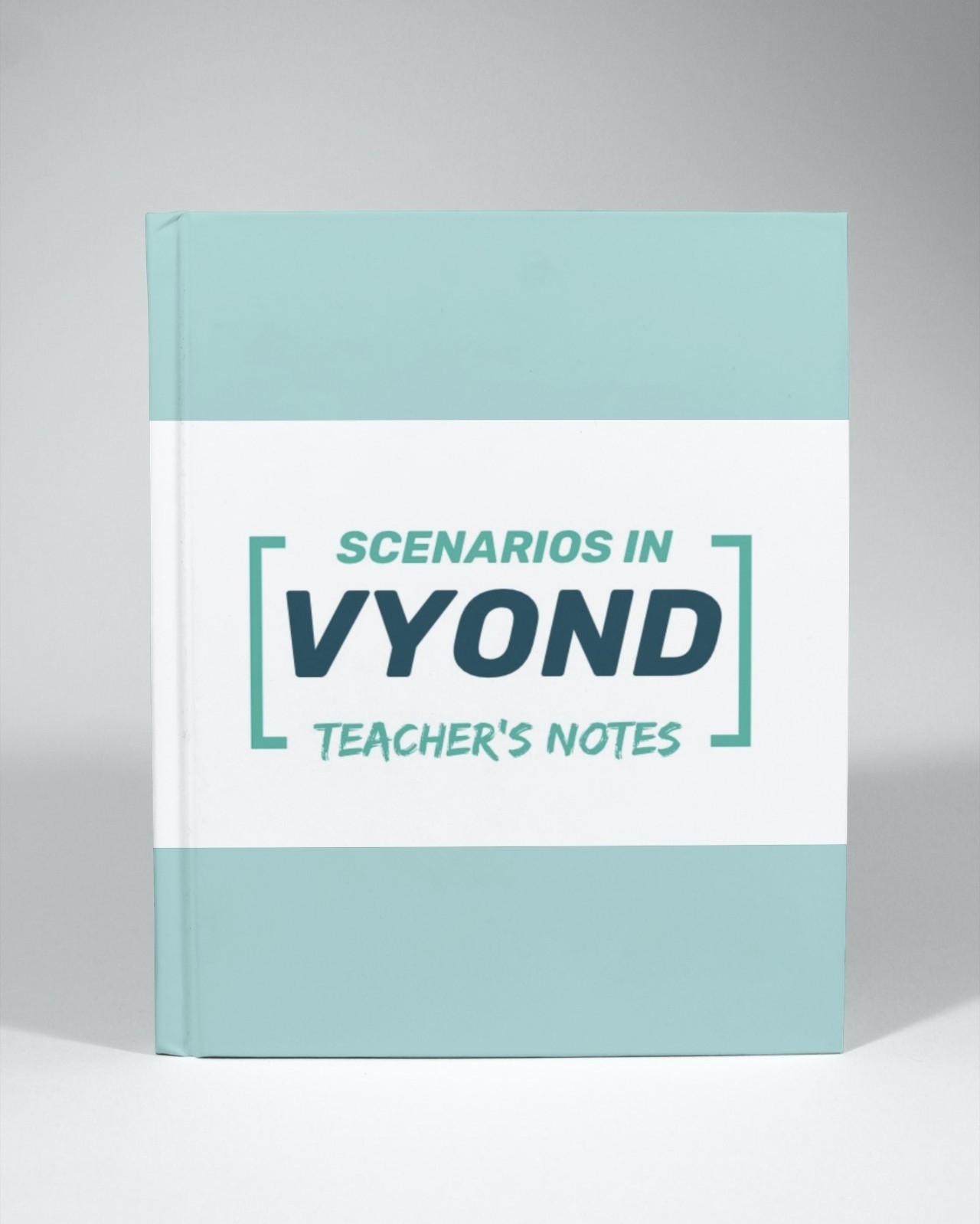